More Than $650 Million Recovered For Our Clients
You Are Here: Home 9 Sexual Harassment 9 Unlawful Touching

No one has a right to put their hands on your body, and certainly not in the workplace. If you have experienced unwanted touching at work – even one time – it may constitute sexual harassment. It may even constitute a crime. 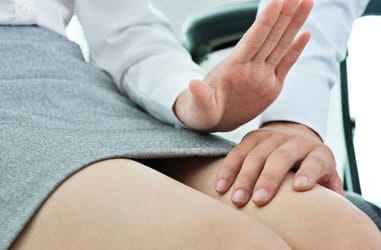 The New York City sexual harassment lawyers at Sakkas, Cahn & Weiss, LLP, can help you stand up for your rights. If your employer failed to protect you from harassment or retaliation, you may be entitled to monetary damages or other relief.

Subjected to sexual touching on the job?
We represent sexual harassment victims throughout the New York City area. Call us at 212-571-7171 for a free, confidential consultation.

What Is Unlawful Touching?

The term “unlawful touching” refers to intentional physical contact with a person’s private body parts without his or her consent. It can also involve physical intimidation (cornering someone) or physical restraint (holding a person’s arms down). Examples of unlawful sexual touching might include:

Unwanted touching does not have to occur in the workplace; it may happen off-site or after hours, such as at a working lunch or a company party. A pattern of sexual misconduct makes a strong case, but a one-time occurrence is still harassment if it creates a hostile work environment for you or if you are threatened with termination or another reprisal after the fact.

The aggressor may be a co-worker or a direct report, or the boss or the owner. It could be sexual touching by a client. It could also be a female-to-male or same-sex dynamic. All of these scenarios are actionable as sexual harassment.

It Needs To Stop. Perpetrators Need To Be Held Accountable.

When confronted about unwanted touching, harassers often play it off as office shenanigans or an innocent gesture. It’s not harmless. They know exactly what they’re doing, and they are likely to do it again unless the behavior is brought to light.

It’s not your imagination. You’re not exaggerating or misconstruing their actions. And you should never have to endure unwanted touching at work or suffer backlash for blowing the whistle.

At Sakkas, Cahn & Weiss, LLP, you will speak directly with one of our experienced attorneys. We will explain your rights under the New York City Human Rights Law, which is favorable to employees. We will guide you through each step of the legal process and aggressively pursue justice.

We have four convenient offices serving the greater New York City area. Arrange a free consultation at 212-571-7171 or contact us online.