More Than $650 Million Recovered For Our Clients
You Are Here: Home 9 Verdicts & Settlements

Following are just a few of the results the attorneys at Sakkas, Cahn & Weiss, LLP have obtained for past clients. Prior results do not guarantee a similar outcome for your claim.

$6.8 million settlement on the eve of trial for a 37 year old husband and father, who suffered severe exposure to lead during the course of his employment. The plaintiff was employed for 5 years by a New York Hospital in the Radiation Oncology Department, with duties that included boiling down lead in a lab and then molding the lead into vests, to be worn by cancer patients to protect organs during radiation. After a full OSHA investigation, the plaintiff sued the hospital and manufactures/suppliers of the lead, arguing that he was never advised that the materials which he handled contained lead, failed to provide protective gear and training, and most significantly installed a faulty ventilation system to remove the lead fumes. Due to the toxicity of the lead, which resulted in removing the iron in his blood, he suffered severe neurological symptoms, which included damage to his sight, smell, hearing, as well as motor skill loss, a lower IQ and impotence.

$3.1 million medical malpractice verdict for an improper insertion of a gastric feeding tube, resulting in the perforation of the client’s duodenum. The plaintiff had received a kidney transplant several years earlier, at which point, doctors repositioned the duodenum. When the malpractice occurred, it was because the medical team failed to properly analyze a film study of the plaintiff’s internal organs, and forced the feeding tube into the tissue, assuming they were entering the stomach. As a result of their error, the plaintiff developed multiple intraperitoneal abscesses and required multiple surgeries, and lost the function of his kidneys, requiring dialysis for the remainder of his life.

$2 million for a woman stabbed to death at work by an ex-boyfriend. We argued that the employer failed to recognize previous incidents on the premises and further failed to employ reasonable security measures to prevent intruders from entering the building.

$750,000 settlement at mediation for a Queens couple struck by a car exiting a gas station. The man suffered soft tissue injuries and a labral tear, which he didn’t repair. His girlfriend underwent lumbar surgery to correct an aggravation of a prior injury.

$750,000 awarded to the family of a 90 year old pedestrian in Brooklyn that died from head injuries, including a fractured skull and subarachnoid hemorrhage, when she was struck by a car in the crosswalk after the driver, who had been parked, inadvertently shifted the car into gear, causing it to lurch forward. We moved for summary judgment, arguing there was no issue of fact on fault, and said motion was granted, starting 9% annual interest running until a verdict could be taken. On damages, the parties fought over the length of time the plaintiff experienced both pre-impact terror (knowing she’d be badly hurt) and post-impact pain and suffering (time from injury to loss of consciousness), eventually arriving at the resolution in question.

$730,000 settlement to a 63 year old retired Board of Education employee, who was both a mother and grandmother. The plaintiff was on a bus traveling from Foxwoods Casino to New York City and was getting up so she could get off at her stop, when the bus driver slammed on the brakes for no particular reason, violently throwing the plaintiff to the floor. The plaintiff suffered multiple physical injuries, the most serious of which was a fractured disc and other herniated discs in her cervical spine, resulting in an anterior cervical discectomy and fusion surgery. She also suffered post-traumatic stress disorder, requiring psychological counseling. The owner of the bus testified that the driver admitted to him that his sudden stop caused the plaintiff to fall and also informed us that the driver had been terminated for not reporting the accident to a supervisor.

$850,000 to a 60 year old actor that tripped over a paver stone at his apartment complex, injuring his lumbar spine and requiring surgery. The victim had a history of neck and hip surgeries from a deformed spine and another serious accident and was already on social security/disability. Compounding damages, however, was that a titanium screw in the hardware placed in his back, snapped, putting his spinal cord at risk and requiring another, more complex surgery to remove some of the hardware and stabilize the back.

$700,000 for a 55 year old Queens man, whose foot got caught in a sidewalk pothole, resulting in him falling and striking his head on the concrete. Thereafter, the plaintiff began to suffer traumatic brain injury symptomology, along with alleged seizures. Defense argued that the plaintiff had a cyst removed from his brain in his teens, which created similar symptoms, and that it was a recurrence of the cyst, not the fall that caused the conditions. We brought in a non-party witness to the accident who described seizure like symptoms immediately following the fall, and not before the fall.

$595,000 paid to the Estate of the deceased, who was run over by an MTA bus, suffering crush injuries and dying later that evening. The defendant was crossing in the middle of the block and the driver argued he never saw her and thus was unable to avoid the accident. An engineer indicated the woman was struck by the front passenger tire of the bus, and should have been see.

$585,000 awarded to an infant who suffered a brachial plexus injury during birth due to shoulder dystocia, a complication that occurs during the birthing process when an infant’s shoulder becomes lodged behind the mother’s pubic bone. Plaintiff argued the doctor committed medical malpractice by not acknowledging risk factors which included a large baby (9 lb., 2 oz.), a prolonged labor and a pregnancy of 41 weeks. Opting not to perform a cesarean section could have avoided the unnecessary injury. The child suffered a mild Erb’s palsy injury which led to a slightly dropped shoulder and mild arm weakness.

$550,000 to a Massachusetts truck driver that was injured when his 18 Wheeler ran over logs that had fallen off another truck on a New Jersey highway. The force of the truck running over the logs caused the cab’s windows to explode and the driver to be thrown about. The plaintiff suffered compression fractures in his thoracic spine at T10-11-12 and lost several months of work.

$480,000 to a Connecticut couple in their early 60’s, who were stopped at a red light, when a drunk driver lost control of his car as he left an office party. The husband, who had undergone back surgery 10 years earlier, with a rod installed, alleged that prior symptoms, such as weakness and pain reemerged post-accident. He also developed carpal tunnel syndrome. The wife had soft tissue injuries. The driver was arrested and prosecution begun, but the DA allowed him off with a misdemeanor and a fine.

$470,000 paid to a Westchester woman for injuries sustained from a dog bite. Unrelated to the dog attack, the plaintiff suffered a very rare, disabling disease, that left her largely home bound, and unable to travel very far by foot, even with the support of her cane. As a result, she retained a dog walking service to exercise her dog on group walks. She often invited the dog walker in for coffee and allowed the dogs to run around her fenced in yard. One morning, one of the dogs charged her, biting her hand. Typically, the result would have been a few sutures, but in this instance, due to the client’s disability, she had multiple complications that resulted in spasm, surgery and partial loss of the use of her hand, which she needed to hold her cane. We sued the owner, for concealing their dog’s prior erratic bite history of others, and the dog owner, for not properly controlling the animal.

$465,000 collected by a 30 year old woman, who slipped and fell on a freshly waxed floor at a Nassau County nursing facility, injuring her leg and developing complex regional pain syndrome (CRPS/RSD) that precluded certain activities. The woman was already on disability for a combination of a prior accident that led to CRPS of an arm, as well as a chronic abdominal disorder. Defendants attempted to dismiss the case, but our office argued that the three individuals waxing the floors, were doing so in a crowded hallway during a business day and neither used signs efficiently or positioned their men to warn people of the slippery floors.

$400,000 awarded to a boiler repair supervisor who fractured his right elbow in a Queens parking lot, when he slipped on ice and fell while exiting his car. The plaintiff required an initial closed reduction to set the fracture and then three arthroscopies to clean up the elbow, which required various stages of removing cartilage and scar tissue and shaving the bone to prevent rubbing against his humerus. We sued both the plaintiff’s landlord and her neighbor, who owned abutting properties and were responsible for keeping the parking lot free from snow and ice.

$325,000 for a gay male in his early 20’s, that was pursued sexually by a much older male doctor, who groped him during an exam and then met with him outside of the facility for what the doctor argued was consensual sex.  The young man, who was religious and coming to terms with his sexuality, thereafter felt guilty and ashamed and began treatment with a psychologist, who analyzed that the victim was a dependent personality, and overly accommodating, due to low self-esteem, who during his brief engagement with the doctor, developed post traumatic stress disorder (PTSD). The doctor was investigated, fired by his employer, and reported to various disciplinary boards, after he was found by an independent investigator to have engaged in similar inappropriate conduct, all of which violated the doctor-patient relationship.

$242,500 awarded to a Staten Island housewife who, while visiting friends, slipped on their tiled kitchen floor, fracturing her ankle and requiring an open reduction/internal fixation (ORIF). In opposition to the defendant’s argument that they had no notice of the dangerous condition, we gathered through testimony that the same tile had been removed and replaced in another section of the house because of its slippery nature, and the kitchen had multiple sources of water – a leaking refrigerator, a dog’s water bowl, and kids swimming in the family pool and tracking wet feet across the kitchen.

$225,000 paid to the family of a 15 year old boy in Westchester County, who was struck by an SUV in front of a school, while riding a motorized bicycle. The young man suffered an orbital roof fracture, lingering headaches and road rash. Defendants alleged the bicycle required a license and was illegal, to which we argued that a pedestrian, cyclist, or person on a scooter should be seen by the driver of a heavy automobile.

$150,000 resolution for a 2017 slip and fall on ice. The plaintiff, a 55 year old and former college basketball player, was walking eastbound on 45th Street on a cold winter day, when he saw a person face down on a driveway apron that separated the sidewalk from the street and led to a parking garage. He believed they had suffered a heart attack and attempted to come to the person’s aide when he slipped and fell (as had the other person) on a thin layer of ice, and suffered a tri-malleolar fracture (a fracture in your lower leg sections – the tibia, fibula and talus- that form your ankle joint and help you move your foot and ankle). Typically this type of fracture requires a complicated surgery, but in this rare case, the plaintiff was casted and made a strong recovery, although he suffers some swelling, pain and distance limitations. We argued the building owner and garage both had a duty to anticipate weather conditions and place sand and salt down, which nobody did. 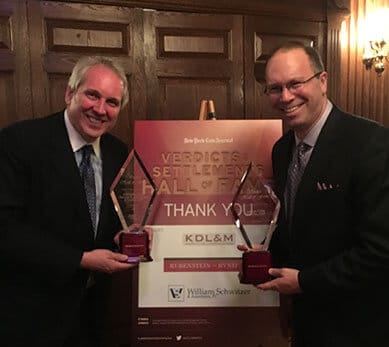